Christmas is the best time to kick back and relax with a selection of classy, good-for-the-heart movies. Here are our top picks – curated by our resident lunatic Moon man Timo Vuorensola. Grab a bowl of Green balls and enjoy!

THE SNOWMAN
Jimmy T. Murakami, Dianne Jackson, 1982
The only correct way to start the Christmas is to tune in to The Snowman. This < 30 min film is nowadays considered as iconic part of the Christmas in Finland as Christmas tree, glögi or disappointing soft presents. Lil’ warning! “Walking in the Air”, the title song for the movie, will surely stick to your head for the rest of the Holidays.

ELF
John Favreau, 2003
We think there’s no good translation for myötähäpeä – but that’s what Will Ferrell is all about. In Elf, he plays an elf who discovers himself to be a human. This movie is hilarious, sometimes even painfully so, but definitely fun for the whole family!

RARE EXPORTS
Jalmari Helander, 2010
The kids are asleep? Well, now is the time for the darker stuff. Jalmari Helander’s Rare Exports is a story of Santa Claus – the real Santa Claus, a huge demon frozen in ice at Korvatunturi – with a definitively unique Finnish twist.

JOULUBILEET
Jari Halonen, 1996
When Mike gets out of prison after missing so many Christmases, his friends decide to throw him a spontaneous out-of-the-season Christmas party. As alcohol is introduced to the mix, things get a bit out of hand and old animosities start popping out. Nasty Finnish story!

DIE HARD
John McTiernan, 1988
No better way to prepare for the Christmas! Watch Bruce Willis kick ass in one of the most classical 80’s action flick.

HOME ALONE
Chris Columbus, 1990
Time to get real! Macaulay Culkin is accidentally left behind when his family flies over to holiday in France. He gets to live a life we all dreamed of when we were kids: alone, in a big house with nobody around telling us what to do – but then things start to happen. Remarkably re-watchable classic!

IT’S A WONDERFUL LIFE
Frank Capra, 1946
Dig out the weird green balls (Vihreät kuulat) and find a comfy spot on the couch. “It’s A Wonderful Life”, is probably the best Christmas movie ever made. A sarcastic angel from Heaven is sent to Earth to help George Bailey (acted by legendary James Stewart), who has lost his will to live. He gets to see what the world would be like if he was never born – and yes, a box of tissues is needed. But fear not, a big and happy Hollywood ending is fast approaching!

JINGLE ALL THE WAY
Brian Levant, 1996
We all love Arnold Schwarzenegger! We really do, and his bulging muscles and thick accent elevates even a lesser of a movie into a golden classic. “Jingle All The Way” is a great 90’s throwback and will bring nostalgic tears to your eyes.

SCROOGED
Richard Donner, 1988
Another 80’s classic. Based on Charles Dickens’ “A Christmas Carol”, Scrooged came out during Bill Murray’s heyday. TV tycoon Frank Cross, who hates Christmas, is visited by three ghosts – and so it happens that even he learns the importance of family, love and all that jazz. Murray brings a nice dose of scepticism and eye-rolling to the story – which we love. 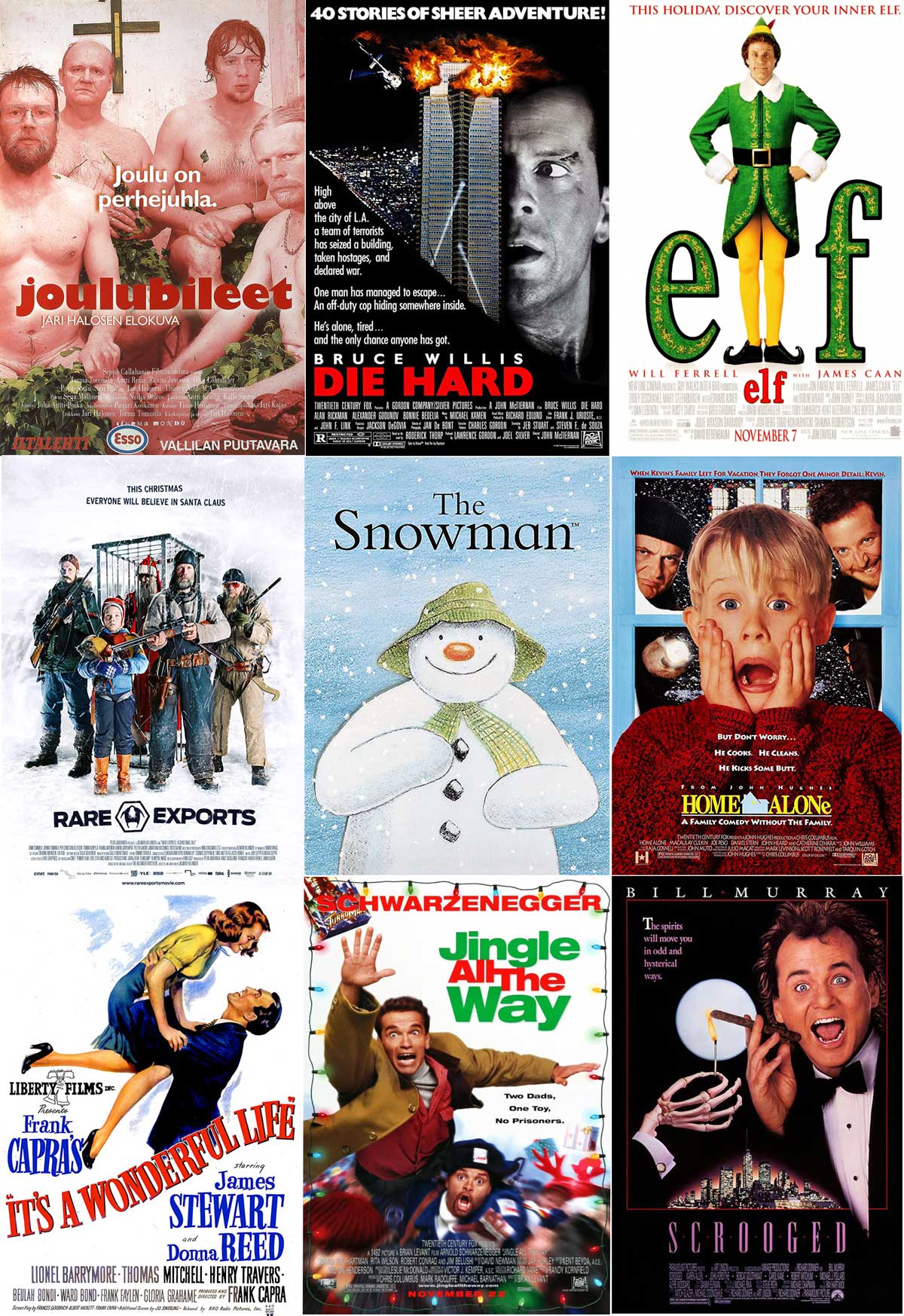